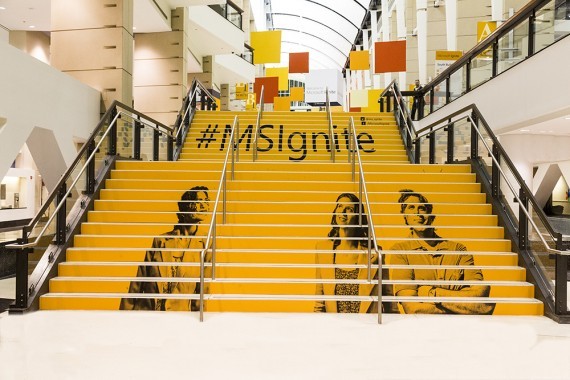 Last week some of the Crossware team joined a massive crowd at the first ever Microsoft Ignite. First thought, it was busy! There were over 300 Sponsors and Exhibitors and 23,000 attendees. Below is a complete overview of the highlights and key points from the 5 day event, enjoy!

During the 4 days that the exhibition area was open we spoke to hundreds of people. The feedback and reaction to our new Office 365 email signature manager was amazing, we will certainly be back next time.

For Microsoft Ignite we also ‘super-charged’ our prize competition, giving away over 200 prizes! Check our event calendar for your next chance to meet us and win some great prizes.

Microsoft CEO Satya Nadella presented the keynote at Ignite. Below is a short summary and the complete recording of the keynote.

You can view all of the other sessions on the Ignite website here.

The Microsoft Ignite team put together a daily recap for each day. You can watch them at the links below.

There were a number big announcements at Microsoft Ignite. I have summarized some key points below.

A new management option for Windows 10 to always keep devices up to date with the latest security updates and Windows features. The new solution will help reduce management costs, provide control over update deployment, offer faster access to security updates and critical fixes, and deliver the latest innovation from Microsoft on an ongoing basis.

For managing Windows 10, available now in technical preview, gives IT professionals expanded tools to deploy, update, manage and secure Windows 10, and will integrate with Windows Update for Business.

Enables customers to broadcast meetings to up to 10,000 people. The service uses Azure Media Services for streaming audio, video and PowerPoint presentations, and offers built-in interoperability with Bing Pulse for sentiment tracking and Yammer for audience conversations.

Organisational analytics was introduced. Powered by the Office Graph, expanding upon personalized insights from Office Delve to provide organizational insights to individuals and teams from Office 365 data.

Available in preview later this year, will deliver enhancements and new capabilities across new user experiences, compliance and reporting.

Available in preview later this year, delivers new features first delivered in Office 365, such as a new approach to document collaboration, faster and more intelligent search, improved eDiscovery, and developer extensibility for mail, calendar and contacts.

Available in preview this summer, takes a major leap forward with a database and analytics platform that provides breakthrough performance for mission-critical applications and deeper insights on any data across on-premises and cloud.

I have pulled together some interesting tweets from the 5 days of Microsoft Ignite. For those who attended, this will be a great way to relive the week. If you were not there, this is what everyone got up to!

Now THAT is a prize draw! #MSIgnite pic.twitter.com/S6yaWLY7U8

Even though MS said not to expect System Center 2016 preview 2 till next week, it’s available now: http://t.co/TkdQQ5z4zR #MSIgnite

Our #ignitemcp party is officially over! Thank you, MCPs, for coming! #MSIgnite pic.twitter.com/pvuL1Is6AB

The view at #MSIgnite Talk about bringing the cloud to your business… pic.twitter.com/EAxFUgSHK1

Cool thing of #msignite you burn all your calories on the walk to your food.

Guess What? Microsoft’s Baaaack! http://t.co/2dtdDny0se via @usatoday >baaaaaackkkkk we are #msignite